Kim Bledsoe and Dan Sefton are franchise owners of over 50 Jackson Hewitt locations in Central and North Texas. Kim Bledsoe learned of The Cure Starts Now after attending the Austin/Round Rock Chapter golf tournament in honor of Brock Fleming. After hearing there was no cure for DIPG and seeing the Fleming's willingness to continue the fight for other kids, Kim told his business partner, Dan Sefton, “This is a cause we need to get behind.” Not only did Dan agree, he has led the charge to get their employees involved.

Each year during tax season, they donate $1 for every tax return filed. The Jackson Hewitt employees tell their clients about pediatric brain cancer and the lack of government funding. When a client donates, they receive a DIPG/DMG warrior band with website to learn more about that child. Not only will this raise money for research, it creates awareness that kids get brain cancer and are more than a statistic!

Kim explained it is also important for his employees to know they work for a company that gives back to the community! 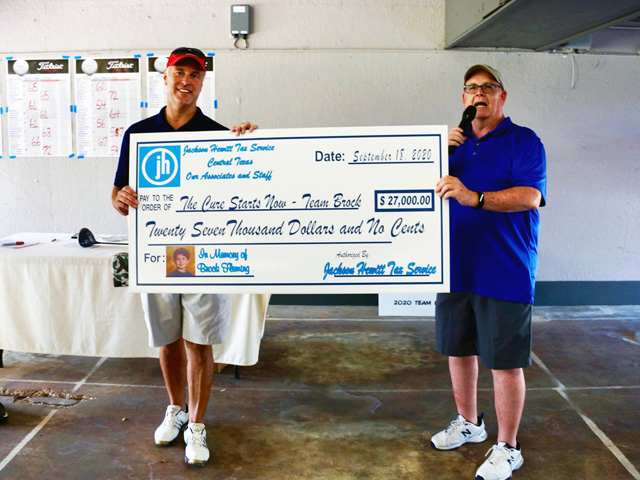 Are you involved with a business that is interested in partnering with us in the fight against pediatric brain cancer? Don't hesitate! — Chat with us today and we'll provide you with some easy options to get started.