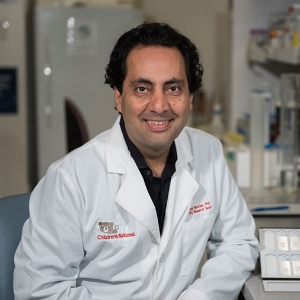 Validation of TAK228 as an Effective Drug for Treating Children Diagnosed with DIPG Diffuse intrinsic pontine glioma (DIPG) is an untreatable childhood cancer.  DIPGs develop in pons making them surgically unresectable.  We and others have identified mutations in histone and their obligate partner mutations that seem to drive tumorigenicity. While epigenetic drugs targeting histone mutation have shown positive outcome in preclinical setting, these drugs have yet to show effectiveness in the clinic.  Moreover, >70% of DIPGs are driven by AKT gain or PTEN loss.  Our collaborative team at Children’s National and Johns Hopkins School of Medicine have achieved robust preliminary success in targeting AKT and PTEN pathways using TAK228, also known as sapanisertib, MLN0128 and INK128. We also find that TAK228 in combination with radiation leads to increased DIPG apoptosis. We also find preliminary evidence of synergy between panobinostat and TAK228, consistent with findings in other tumor types that mTOR inhibition in combination with panobinostat leads to improved cell killing (20, 21). We hypothesize that combinatorial regimen of TAK228, radiation, and panobinostat can effectively target H3.3 and H3.1K27M mutant cells in vitro and in vivo and that any mechanism of drug resistance are identifiable using cutting edge protein and gene studies. In this study, two Specific Aims will be tested: Specific Aim 1. Assess TAK228 efficacy in H3.3 and H3.1 DIPG models, alone and in combination with radiation and panobinostat.   Specific Aim 2. Determine mechanisms of cellular resistance to TAK228.  Our collaborative team has all necessary resources to carry the outlines experiments. The experiments detailed here will provide the pre-clinical justification of a phase I/II clinical trial of TAK228 in patients with newly diagnosed DIPG.

Innovation. Our collaborative proposal is highly innovative in the following aspects: - Strong preliminary data indicating the efficacy of TAK228 for targeting DIPG tumor

- Ability to target both mTORC1 and mTORC2 pathways using TAK228

- mTORC1 inhibition by commonly used drugs (e.g. rapamycin and everolimus) often leads to upregulation of mTORC2, which may contribute to the relative lack of effectiveness of mTORC1 inhibitors. TAK228, which is a dual mTORC kinase inhibitor may have broader therapeutic use than rapalogs, due to its ability to inhibit both mTORC1 and mTORC2.

- The agent is available for clinical trials in the United States through the CTEP program at NCI.

- Access to robust and rare xenograft, allograft, and in vitro models of DIPG avenues.

- Potential to assess and identify combinatorial therapy of TAK228 for direct translational application of this agent.

Feasibility. The proposed project is a highly feasible project as shown by our robust preliminary data and published manuscript (Cancer Letters, 2017). Our collaborative team of basic researchers and clinicians have the expertise and the resources to fully execute the proposed project.